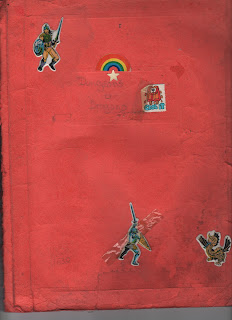 I recently found the folder I used when I first played what I called D&D with my little brother, back in the early eighties or so.  It's falling apart and suffered water damage at some point, but it's a treasure trove of what D&D meant to me in those days of my youth.

I used to think that I hadn't had any exposure to "real" D&D, such as a book from Moldvay's Basic Set or a copy of the Advanced D&D Players' Handbook.  But a look at a character sheet from the old orange folder shows me something else.  Clearly I had been exposed to D&D at this point.  I did take part in a D&D club in middle school, so that might be where that came from.  I have a memory of being handed a triple-class character, on a sheet with stat names and such drawn in marker and the changeable information in pencil, all written on plain notebook paper.  Beyond that my only contact with role-playing games at that time was from the Fighting Fantasy Gamebooks.  These were basically Choose Your Own Adventure stories, but they included a combat resolution system that required a simple character sheet and a pair of six-sided dice.  My first polyhedral dice came from my Mentzer Basic Set, so I'm fairly certain we were using six-siders when we played.

When I played this "D&D" with my younger brother, I was both a player and a DM.  I drew the dungeon maps, I described the surroundings, but I had characters in the mix too.  I can only assume I stayed out of the way when my brother encountered one of the tricks or puzzles I put into the dungeon.  What fun would it be to solve my own riddle?

I've scanned in a few pages from this folder and I'll be posting about them from time to time, in the hope that this personal archaeology trip is of interest to anyone besides me.

Email ThisBlogThis!Share to TwitterShare to FacebookShare to Pinterest
Labels: My First Dungeons and Dragons