Changing of the Dice

While tinkering around in the simple system I'm yanking out of West End Games' Ghostbusters game, I pondered changing from using six-sided dice to using four-sided dice.  I find the ubiquitous six-sider boring, though it's far more accessible to non-gamers who might be better able to pick up this rules-light system as opposed to the monstrosities that are latter-day editions of D&D.  Four-siders are my favourite die, followed by twelve-siders, so I thought I'd look into how the game might change based on a different randomiser.

Adjusting the difficulty numbers assigned to tasks is simple: the standard range is 5 (easy) to 30 (difficult), with a new level after every five numbers.  Well, I see that 5 is 6-1.  Six is the maximum you can roll on one d6.  So for every "level" of difficulty you should be rolling one more die if you hope to succeed.  You would have a hard time rolling a 5 on a d6, but most characters don't have scores of 1 (I think 2 is the minimum, though injury or unusual circumstances can cause you to lose points in your traits), so we can safely assume the player will be rolling at least two dice.  If I apply the 'max on die minus one' formula to the d4, I get a scale from 3-18.  Again, it's hard to roll a 3 on a d4, but if you're rolling two of them, not too bad.  So adjusting the scale of difficulty numbers seems to translate okay.

However, with only four possibilities whenever you roll a die, the Ghost or Skull Die becomes a much larger threat.  The probability you will roll the skull and have Something Bad happen leaps from 1 in 6 to 1 in 4.  That's significant.  It could be justified by the setting -- if you run a dark horror or post-apocalyptic game with a deadly and/or scary mood, where the PCs should expect awfulness to be around each and every corner, it might actually benefit you.  I don't know that that's a good idea for my setting idea, which I'm planning to be mostly serious but not grim, with ample opportunity for some comedy/foolishness/slapstick.

So the jury's still  out on this one.  I'm still very much in the brainstorming phase of the setting, and I'm assembling the rules (mostly, as I said, pulled right from the pages of the Ghostbusters book) bit by bit as I go, so there's plenty of time to tweak and experiment. I'm tinkering about, in my head, mostly, with the idea of adapting using stealing the D6 rules used in West End Games' "Ghostbusters" RPG for a gaming experience. I loved the super-light rules in that game and I think they'll be great for any number of settings. I would probably re-name the "Ghost Die" to a generic "Skull Die" or something, but that's barely worth mentioning.

In the Ghostbusters game, character sheets are slightly larger than a 3x5 card, including room for a portrait. Characters have four Traits: Brains, Muscle, Moves, and Cool, and a Talent for each, which lets a player roll four extra dice when attempting a feat that falls under that Talent. Each character also has a Goal and a set of Brownie Points. The general mechanic is: to complete a task, the GM assigns it a difficulty and decides what Trait it falls under. The player rolls the number of dice their character has in that Trait and tries to equal or beat the difficulty number. The dice are all six-siders, and one must be the Ghost Die, which has the famous 'no-ghost' symbol in place of the six. If you roll the ghost, Something Bad happens, whether or not you succeed, and the ghost counts as a zero. If you succeed or fail without rolling a ghost, you just succeed or fail and nothing particularly special happens outside what you might expect to happen in that situation. But if you roll a ghost, even if you succeed, Something Bad happens, usually, in Ghostbusters, with comic effect. 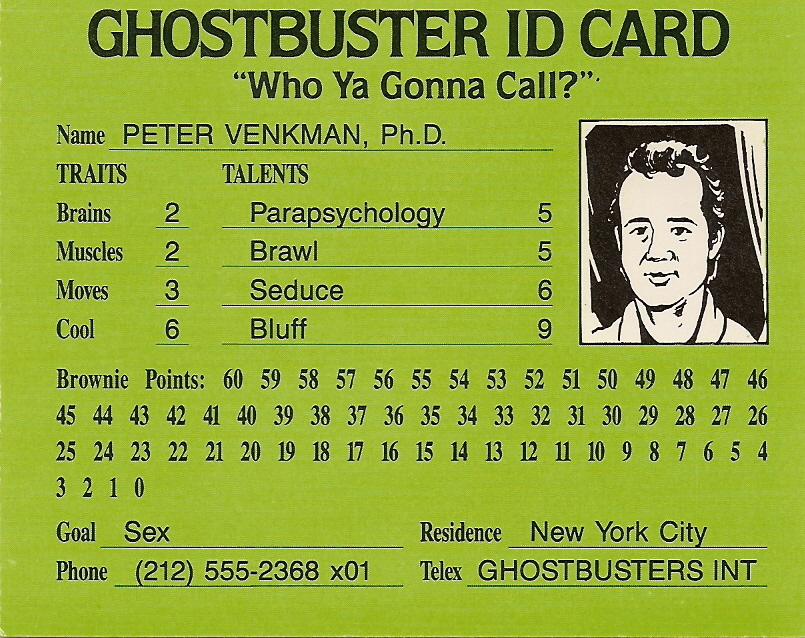 Players can spend Brownie Points to improve their chances to succeed or to save their character's butt in an emergency. They earn Brownie Points by successfully completing adventures and by explaining what happens to their character when they save his/her butt with Brownie Points. Brownie Points are a little like Fate points, but they're also hit points: if you take damage from something, say, a poltergeist slams you in the face with a phone pole, you lose Brownie Points. I think it's a wonderfully compact and functional system that you can play without the need to look up things on a chart every 2.5x10-2 seconds.

I've made some notes on vague ideas for a sci-fi setting, a 'mutant animals living in our modern world a la Teenage Mutant Ninja Turtles' setting, and I've even pondered using this in a fantasy setting, and not only to wean some of my players from the idea that D&D 2nd Edition Skills and Powers is the only D&D ruleset worth playing fantasy in. And I'm really getting tired of Forgotten Realms.

When I've looked over the Ghostbusters rules in a little more detail, and decided if this is something I want to do or not, I'll update here.

An Update on The World of the Twelve Faces (12W)

Due to circumstances beyond my control, I have not been running 12W as I planned. I may get back to it, but right now I have other things of importance in my life that are taking precedence. I may go back later and tweak it before offering it on Google Plus. I've been thinking a little lately of eliminating gods (again) and turning the cleric class into a simple monster-hunter/vanHelsing type of thing, in a region where creepy what-the-hell-IS-that former people or something wander about. I was inspired by recent additions to Dwarf Fortress on that front (well, recent meaning a handful of versions ago, anyhow). More detail on that as I ponder it.

But for the moment the World of the Twelve Faces is silent.